LikeFont has always been bringing better experiences and surprises for the users. On June 21th 2017, LikeFont V3.0 came online. This version is the most important upgrade in history, the identification speed is much faster, and the rate of accuracy of results are much higher. This version also introduces new features for image preprocessing, character stitching, font preview, etc.. Most of the images no longer need to be edited in image processing software such as Photoshop.

Here are the major updated features:

1.New image preprocessing features including: image cropping, rotation, flipping, resetting. With those features, the images which have been rotated, skewed, flipped or have joined-up characters are enable to be perfectly identified now.

4.New input methods for characters including: Character translation and character insertion. Characters are enable to be translated among tranditional Chinese, simplified Chinese and Japanese. If there are multiple possible translated results for one character, it will list all the possible characters for the user to choose the desired one. The foreign characters are hard to be input from the keyboard. Now you can click on "Character" button, and then choose the Unicode block in the dropdown menu(the menu items are sorted in the Unicode block order), and then you can quickly browse all the characters, signs and logos in the range of Unicode 10.0.0.

7.Big data have been deployed, and the server loads have been balanced, CDN acceleration and async identification are supported now, the identification speed is much faster, most of the identification can be finished immediately. The speed is believed to be at least six times faster then the previous version after testing. The algorithm of identification and similarity caculation has been improved, the rate of accuracy of results are much higher. The identified fonts are sorted in a more humanize way.

8.New filtering settings for identification community: post status and post date. The logged-in users can also browse the posts of themselves. 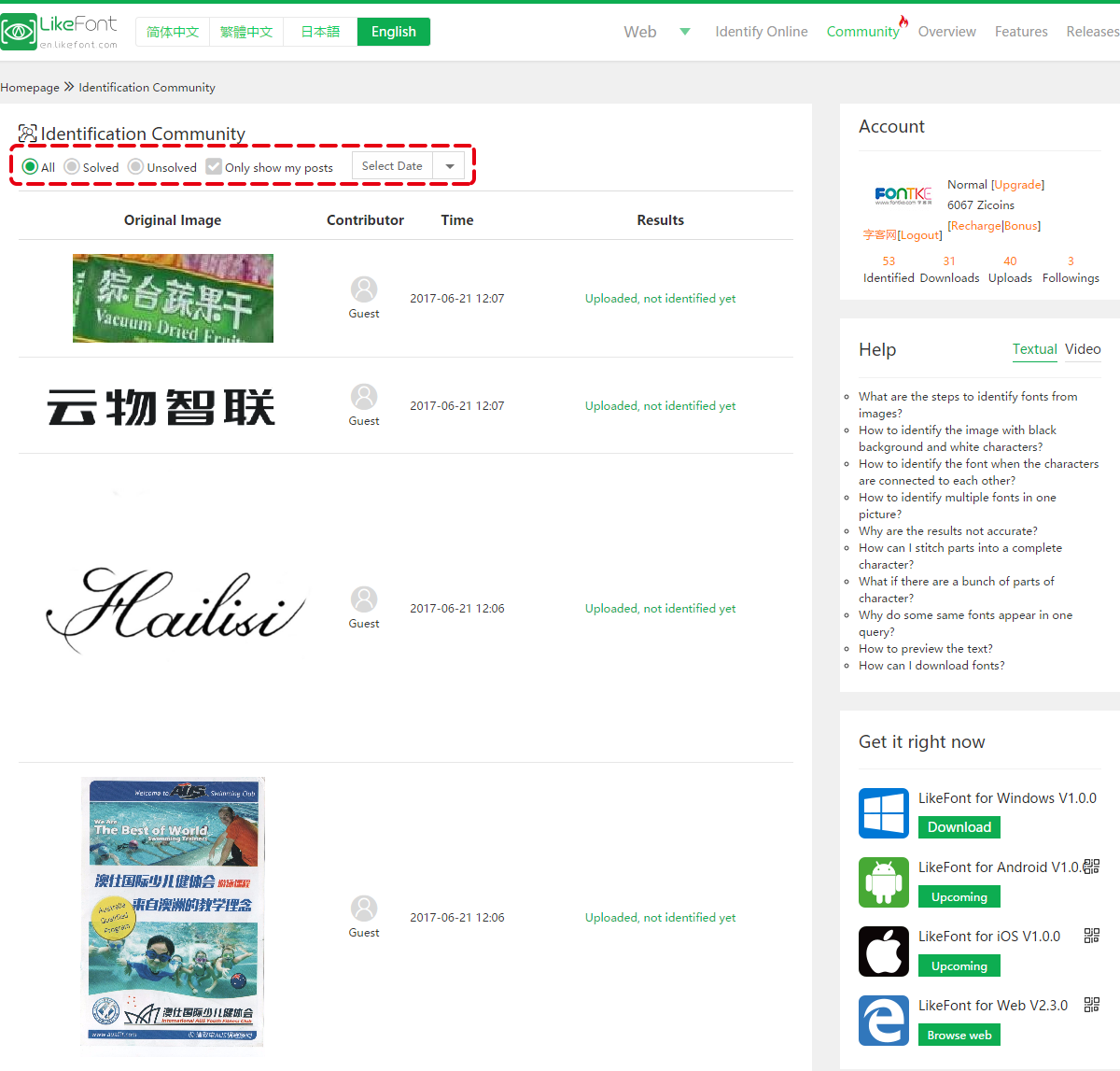 LikeFont first came online on November 11th, 2015. It has been evolving for seven months two years, we are always focusing on user's needs, and keep upgrading and improving our product features. The amount of usage is growing at a geometric rate. The users upload nearly 10,000 images for font identification everyday. We will always hold this philosophy that technological innovation is a major driving force, provide the users more and more useful features and make everything as powerful as possible. In the future, we will continue to develop mobile (Including: Android, iOS, WeChat Mini Program), PC (Including: Windows, macOS) and Browser Extension (Including: Chrome Extension, Firefox Extension, Internet Explorer Extension) products, and also open LikeFont API, making LikeFont available in most of the platforms. We are doing our best to build the most advanced font identification service online.